forget sheryl sandberg for a second. let’s focus on joan holloway. christine hendriks’s character on Mad Men is a ship’s figurehead on the turbulent seas of the late sixties. she makes the most of her admirable figure and her character’s fashion sense, portraying a woman far smarter than she is given credit for, or gives to herself.

she attempts to make an executive decision and is put in her place by a coworker who knows the dirty secret of how she came to be on the board. her fellow board members will always take her side because they know she’s their company’s true brand, for a mix of right and wrong reasons. you can feel her ruminating about this for the rest of the episode as she winds up emotionlessly kissing strange men and putting herself down when conversation arises about her title and experience. “don’t forget she’s also a mom!” the writers remind us as joan’s mother leaves her baby boy in her lap.

joan’s struggle with self is far more complex than don draper’s, whose past was laid out for us long ago. don is the son of a prostitute and an adulterous liar with double standards. his wife can’t even kiss a man on camera for her acting job; nope, that makes her a whore: i’m so mad at wifey now…i better go sleep with my neighbor’s wife! oh and how it must hurt don that the invincible peggy, now the competition, has even taken his catchphrases to land a client. the women are stealing his soul! succubi!

i’ve just had a heated discussion with a client about the concept of brand consistency. contemplating this after a shower, i wrap myself in a towel and stomp outside to share with my husband some important words on his company’s brand, as he’s developing ideas on the porch. i stand there in a towel, freezing and dripping, reminding him i do indeed know what I’m doing. no argument there…and why did you come outside in a towel? ok, so at least I’m passionate about what i do. i get dressed, dry my hair and put on makeup. me time, but a distraction nonetheless.

women may always struggle to find their personal brands. in addition to many forms of pressure, there are more appearance-based choices — each with their own perceived implications. almost any men’s clothing department is a boring banner of military sameness: navy blue punctuated by little bits of bright color for the adventurous. the focus is on the man, not the suit. virtually any women’s clothing department is an explosion of color and style, always changing with the season. i can never keep up and don’t try to. Chanel may be timeless, but for those of us who can’t afford her, “when in doubt, wear black.” i just punctuate my black with full strength magenta: done.

then in a delicious irony, my dear friend velvet d’amour calls from paris to have me do the layout for the current issue of her groundbreaking body image/fashion magazine, Volup2.
hell, yes! if you are not familiar with velvet’s work as a photographer and gorgeous plus-size fashion icon, you must Google her bold strut down the runway wearing a t-shirt that reads PLEASE FEED THE MODELS. this is a chick who knows her brand. 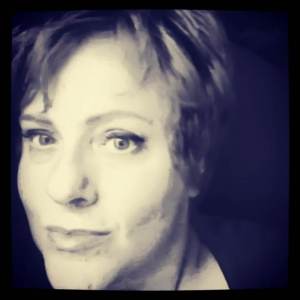 a creator of copy + visuals for Trader Joe’s, michele also has years of improv comedy experience and brings a signature quirkiness to her blog at www.whatisabrand.wordpress.com. she’s currently working on a Mediabistro advertising certificate, and helming Designvoice, Inc. (when not enjoying her 7-year-old daughter). follow her on twitter at @mamagills.